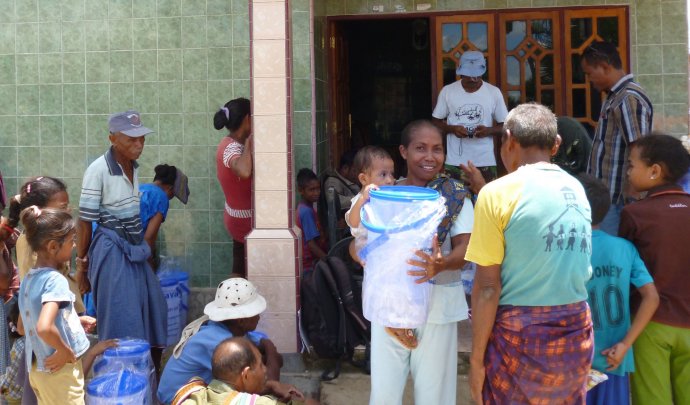 Nazava Water Filters, a member organization of Nexus, is now registered under the Gold Standard. This will enable Nazava to provide more rural households with safe drinking water while reducing greenhouse gas emissions.

Clean water access is one of the UN’s Sustainable Development Goals (SDGs) and is affected by a number of factors, including climate change. Solutions that address both of these issues are desirable.

What’s even better is when such solutions can earn funds for reducing carbon emissions and pump this revenue back into providing clean water for low-income households. Nazava is planning to use carbon finance revenues in this way and is now officially registered to generate carbon credits.

Nazava sells affordable water purifiers to households across Indonesia. Earlier this year, the organization was awarded the Ashden Award for Sustainable Energy and Water.

Nazava’s filters are available at 140 sales locations, retail for $20, and remove 99.99% of contaminants from local water supplies.

The technology is incredibly liberating for people in areas lacking a supply of safe drinking water.

“Almost every week there is a story that really touched the hearts of people in the interior who are not sick anymore because of the use of a water filter,” said Socrates Homer, a Nazava customer from Manokwari. “There are many stories about people who walk for a full day so they could drink from a water filter in another village.“

With a water filter installed there is no longer a need to boil water using wood or fossil fuels. This means carbon is kept out of the atmosphere. With governments, companies, and individuals looking for ways to offset their carbon footprints, the emissions saved by water filters have a value on the voluntary carbon market.

Nazava has now been registered under the Gold Standard, an organization that ensures high-quality emission reductions. The next step will be the issuing of carbon credits, which they can then sell and use the revenues to scale up their business and reach more people with their filters.

“Every day we witness the impact of our filters on the lives of our clients,” said Guido van Hofwegen, co-founder and Director of Nazava. “We are very happy to be able to issue credits and will use the proceeds to expand in isolated areas where safe water is needed most.”

Carbon finance is proving to be an important tool for organizations to fund a greater impact and more progress towards the SDGs. This was the impetus for Nexus’ formation back in 2009, to leverage more opportunities for accessing carbon finance and scale up effective projects. In fact, it was one of Nexus’ tailored financial offerings, the Climate Finance Revolving Fund, that supported Nazava’s project development under the Gold Standard.

“Nexus is excited for the team at Nazava to begin using the carbon market to scale up clean water access in Indonesia,” said Thomas Blackburn, Program and Business Development Director at Nexus. “We are keen to support more organizations to overcome financial and technical barriers to scale and build greater momentum towards the SDGs.”

For information on purchasing carbon credits from the Nazava clean water project or to learn about other projects that are reducing carbon emissions, contact Nexus or visit our website.