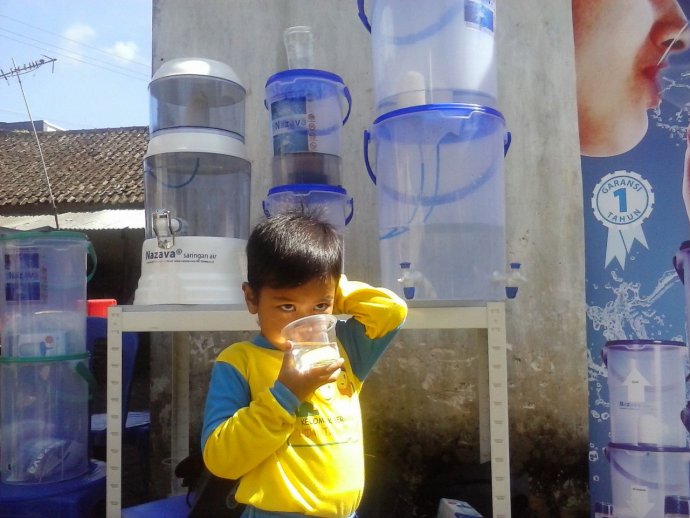 According to the United Nations, 663 million people lack access to improved drinking water sources and water scarcity affects more than 40% of the global population. This number is expected to rise in the coming decades and solutions are needed to improve clean water access.

Nazava Water Filters has emerged as a leader in this field. Since 2009, Nazava has sold over 53,000 water filters, providing more than 200,000 people with clean water access. The organization is based in Indonesia, a country where over 30 million people currently lack access to clean water.

Nazava’s filters remove 99.99% of particles and pathogens and users can produce two to three liters of water per hour. But the filters do more than just create safe water. They offer users some cost certainty as they no longer must purchase their water or spend their income on fuels to boil it. Reducing communities’ reliance on fossil and wood fuels also means fewer CO2 emissions and improved air quality.

Nazava’s efforts have caught the attention of the larger sustainable development community. The organization was recently honored with the 2016 Ashden Award for Sustainable Energy and Water.

These awards were established in 2001 to recognize leaders in the field of sustainable energy. As water filters reduce the use of traditional fuels that create CO2 emissions, they function as an energy solution as well as a water solution. Nazava joins a list of 180 former Ashden winners, distinguished alumni from around the world that have collectively improved the lives of 47 million people and prevent more than 9 million tonnes of CO2 emissions every year.

As part of Nexus, Nazava and other member organizations are sharing knowledge and experience and making progress towards the Sustainable Development Goals (SDGs). Clean water, reduced carbon emissions, energy access, inclusive economic growth, and many more of the 17 goals are being affected by the technologies and innovative business models that these enterprises have developed.